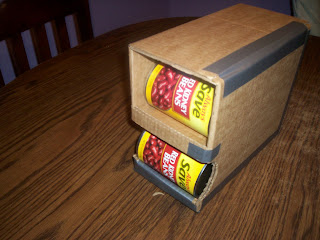 It's a rotating can holder.  Not very pretty, but handy.  It holds a half dozen cans.  You put the new ones in the top and take the old ones out from the bottom.  This way you are always using the older ones first.  I'll try to explain how I made it.﻿ 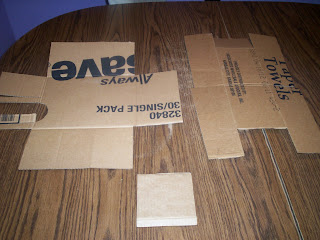 I took a large cardboard box and cut four pieces out.   If you look at the left piece, you can see the inside square.  This was the measurement of three cans (standing up) wide and two and a half cans deep.  The flaps are slightly bigger than the can was tall.   I then cut out the four corners and folded all four flaps.

The length of the piece on the right was the measurement of the inside square's length and then doubled.  The width was the same as the flaps and then tripled.  I then folded it in half and cut at the fold on both sides but left the middle together.  Then as you can see in the picture I measured the can size plus a little bit more  to cut both ends in the middle.  Only one of them will be cut off, the other folded.
The small piece is actually one of the cut corner pieces. 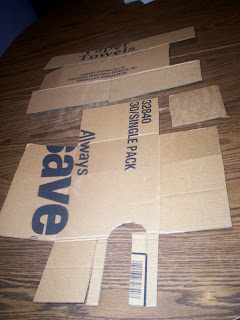 The fourth piece was a duplicate of the first piece, except for a small difference in the cutout below.

For the cut out that you see at the bottom of this picture, I just used the can bottom for measurement and cut the circle, leaving the small flap.  That flap is about 2" and the smaller flap toward the top is 1".
We'll call this the left side. 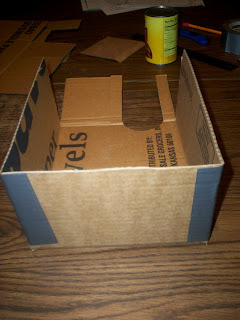 Take the right side and bring three sides together, then  duct tape at each corner. 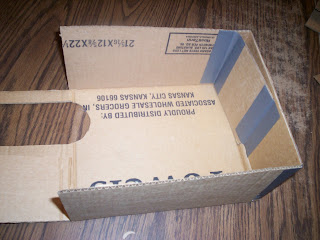 This is where the small piece comes in.  Fold about an inch in so that it will jut out from the corner and duct tape it down.  This is so that  the can will roll to the front when it drops. 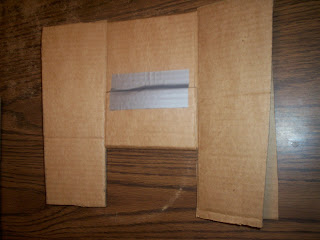 Now take that second piece, fold it in half, and bring that flap that wasn't cut off around to hold it together and duct tape it down.
The flaps on each side will each go up and down to make a stand.

I made this piece this way because it gives a lot of strength to the holder. 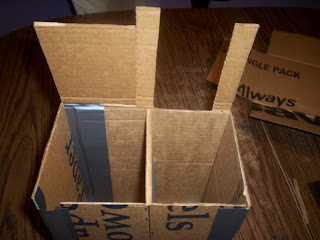 Put the middle piece into the right side as shown.  What you see at the bottom of the picture is one side with the flaps up and down as described above.  You can see that I made it a little bit small but I was figuring sizes then.  The measurements I gave above are right.  I just duct taped it so that it would stay together.  You just have to make sure that the gap from the cutout is in the back of the box.  This is where the cans will fall through to the bottom.

The flap at the top left will be folded around into the box and duct taped.  The two small flaps will be duct taped down across the front. 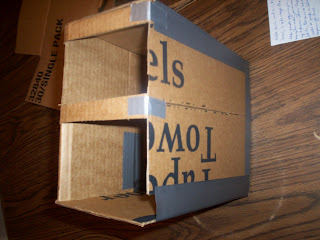 This is what it should look like so far.

As a side note, I discovered later that I needed to cut the small can circle out of this piece on both sides.  I did not do it at the beginning like I told you to do.  You will see it already cut in the next picture. 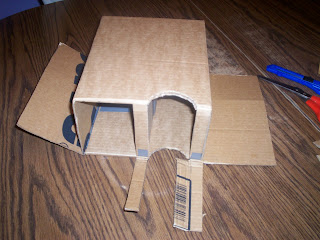 Now, lay the right side onto the left side as shown.  Bring the three flaps together at the corners and duct tape down.

The two front flaps will be taped across the front, with the bottom flap folded to the inside for strength.  Tape it down inside.

Insert cans and you're ready to go.  You could paint it, paper it, or leave as is.  You're the only one to please.

I hope I didn't lose you in the directions.  It really isn't hard to make, once you get the measurements right.

Now all I need to do is remember to grab a box at the store each trip, and eventually I will have enough made to fill my cupboards.

Til next time, have fun!