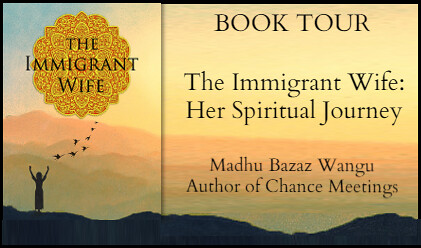 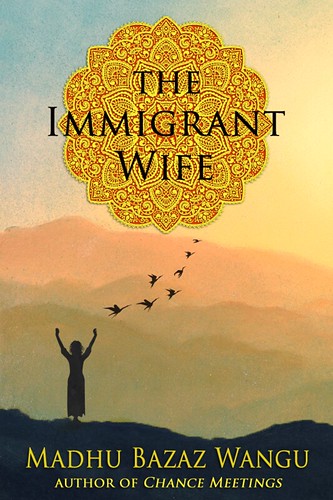 As a girl on the brink of womanhood in 1960s India, Shanti Bamzai has big dreams. Rather than enter into an arranged marriage like her sister, Shanti embarks on a journey into the unknown, leaving her family home behind for an education and a chance to chart her own destiny.While India experiences an upheaval of cultural and societal changes as old-world traditions collide with the modern global era, Shanti navigates college, a marriage of her own choosing, and motherhood, fighting a constant battle between the pressures of traditional expectations and her own burning desire to be an artist and an independent woman.A move to America presents exciting new opportunities, but Shanti is disappointed to find herself still hemmed in by the restrictions of her Indian upbringing. As her children become adults and her marriage becomes a shell of what it once was, Shanti must find the courage to step out of her husband’s shadow and into the life she’s always dreamed of.

"Beautiful and lush, The Immigrant Wife takes the reader on one woman's touching, turmeric-drenched journey from naive but determined art student in India to longing-filled American wife and mother. The author Madhu B. Wangu has written a maharaja’s banquet for the senses." - (RITA Award Winning Author) Gwyn Cready


"A winner. The Immigrant Wife: A Spiritual Journey is beautifully written. The story weaves many small strands into an intriguing tapestry, much like the paintings of our heroine, Shanti. It paints two pictures one of the beautiful valley of Kashmir and the beautiful hills of Western Pennsylvania. Shanti’s quiet determination to stay true to herself, her art, and her family is inspirational. I loved it! - Professor Laurence Glasco (University of Pittsburgh)

"In her debut novel, Madhu Bazaz Wangu, conjures a mysterious time and place. The protagonist, Shanti, begins her life as an idealistic but naive girl from the valley of Kashmir. As the story unfolds in America, she learns to heed her desires and shape her life, no longer rolling along like a stone turned in the tide. Wangu creates rich, dynamic images of India, comparable to her watercolors, evoking every sense. The indigenous sights, sounds, and smells are so vivid that I swear I could find my way to Shanti’s home. Wangu's style is gentle and quiet like the protagonist, and deeply powerful. This tale of love and nurturing, loss and growth, and transformation will stay with readers long after they finish the novel."  - Kathleen Shoop (IPPY Award Winner of The Last Letter)

MY HONEST REVIEW OF The Immigrant Wife

Shanti did not want to marry, and become a wife having nothing to look forward to except the daily drudgery of running a household of endless chores. She wanted to go to college to become an artist, and nothing else. This was a disappointment to her father, who was from traditional India. After graduating college with a degree in art, she meets Satyavan and falls in love. But will this be the end of her artistry? Only time will tell.

I wish I was as headstrong as Shanti was. It was refreshing reading about her life’s journey. I could relate to many of her emotions and thoughts, and believe almost all women could. But with each experience comes growth and knowledge. Shanti went full circle with hers. This was a long book to read, but well worth the time.

An author, artist and the founder of the Mindful Writers Group, Madhu Bazaz Wangu was a professor of arts and religions of India before becoming a full time writer. She has a doctorate in the Phenomenology of Religions from the University of Pittsburgh and a post-doctoral fellowship from the Harvard University. For twenty-five years, she taught at the University of Pittsburgh and Chatham College in Pennsylvania, Wellesley and Wheaton Colleges in Massachusetts, and Rhode Island College.

Madhu B. Wangu has published numerous essays and four books on Hindu & Buddhist art and religions. She has also held five one-person art exhibitions in India and US.  Her debut fiction, Chance Meetings: Stories About Cross-Cultural Karmic Collisions and Compassion was published in April, 2015. And her debut novel, An Immigrant Wife has just been released. Currently she is writing her second novel, The Last Suttee.

She lives in Wexford, Pennsylvania, USA with her husband Manoj. They have two daughters — an avionics engineer and a pediatrician — and are blessed with two grandchildren. 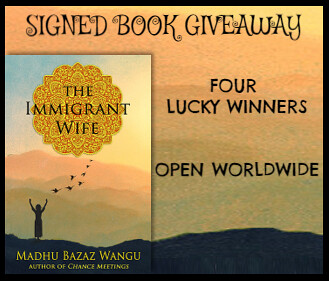 Enter Below and Good Luck !!
a Rafflecopter giveaway
Posted by Julie Baswell at 6:00 PM