After a life filled with destruction of others and himself, and his body ravaged by disease, there's only one thing left for Javier Calero to do. Leave a legacy that will finally bring meaning to his life—and to the death of an American president more than fifty years ago.

The CEO of a green energy company is murdered behind his million-dollar estate, his neck nearly severed in two. Recruited to aid the widow and find a savage killer, Booker finds himself in the middle of a family train wreck.

Days later, thrust into the crossfire of a deadly sniper, Booker eludes sure death with the uncanny arrival of a young woman who only wants to save her father from harm. But she can't do it without Booker's help.

Joining forces with a Latin spitfire, Booker and his new sidekick, Maggie, embark on a twenty-four-hour quest to hunt down a killer determined to make an indelible mark on history—just like the one that struck down John F. Kennedy a half-century earlier, which launched a cascade of assassination investigations and theories.

Check out the other books in the series

On a cool October afternoon, the majestic blue sky above Dallas is polluted with swells of gray smoke, carrying shattered memories of fifteen people, mostly children, who've just been killed by an explosion on a bus.

A white supremacist group claims responsibility, opening old wounds, turning neighbor against neighbor--fracturing the community. A Southeast Dallas native, Booker T. Adams couldn't be more invested in the city…in the people he'd served for the last seven years as a beat cop for the Dallas Police Department. Without warning, it becomes personal for Booker on so many levels. And as panic grips the city, he must decide how much he's willing to sacrifice to end the chaos.

With his career called into question and his family in the crosshairs of one terrorist act after another, Booker invests every fiber of his being to protect a broken community, and to stop the brutal, senseless slayings.

If he fails, terrorism will reign in the city of Dallas.

Booker: Tap That (Booker #2)
A performance for the ages.

Courtney Johnson brings the house down in the heart of the vibrant Dallas Arts District. Later, shrills pierce the hallways of Wyle Theater when Courtney, a budding Broadway musical star, is found dead, a single bullet to the head.

Driven to find the killer before panic tears apart the arts community and all those who support it, private investigator Booker T. Adams discovers evidence of a professional hit, then uncovers a lovers ' triangle that takes him all the way to the mean streets of Boston.

And then it happens again. Another performer killed, someone Booker had met. Rocked by the shocking murders, performers and patrons alike fear that a serial killer is on the loose, and no one knows when and or where another dead body will show up.

But professional obligations quickly morph into personal vendettas. Running against an unforgiving clock, Booker is forced to solicit the help of a crime boss, The Shark.

With his life threatened at almost every turn, and his heart being put through a meat grinder, Booker taps into every resource at his disposal to stop more than just a killer.

But at what price?

Full of unforgettable characters, bone-chilling suspense and stunning thrills, BOOKER - Tap That is a wild ride that will test even the most fervent reader's quest for a luminous reading experience.

John lives in Frisco, Texas with his beautiful wife, three opinionated kids, and a feisty fat cat who rules the world.
Find the author on the following sites...

While Booker works on a new case involving irreplaceable JFK assassination memorabilia, he is offered another case, concerning the murder of a prominent figure. When a second murder occurs, he utilizes all his resources to connect the two murders. He then meets Maggie Calero, also a private investigator, who stopped him from shooting a sniper, who in turn was shooting at a mobster with ties to the JFK assassination. As clues start to fall into place, Booker discovers that his two cases are intertwined, putting him in high gear to catch the killer before there is another victim.

Booker always gets such interesting cases. I loved Samantha’s soccer game fiasco. I could actually see it play out in my mind. Maggie was such an interesting and totally likeable character. With that personality, she reminded me so much of Jane Rizzoli, if you’re familiar with the show Rizzoli and Isles. And it was so cool that the author mentioned a book by Melissa Foster, another of my favorite authors. 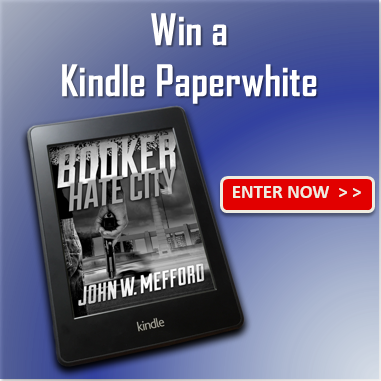 Posted by Julie Baswell at 7:46 AM