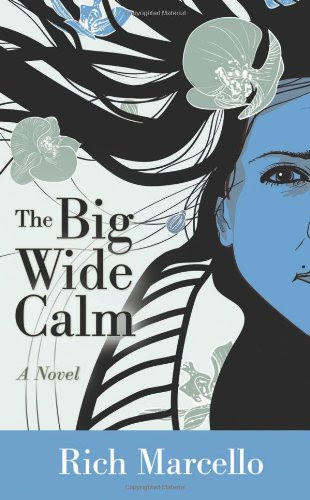 The Big Wide Calm: A Novel

Paige is a rock star. The world just doesn't know it yet. She's got the charisma, the drive, and, of course, the mega-musical skills. All she needs is to make her debut album, one that will change the world, inspire revolutions--and make her galactically famous along the way.

When John Bustin, a former semi-famous singer/songwriter offers to record Paige's album for free, it feels like destiny, like the next step on her way to the Rock and Roll Hall of Fame. Guitar in hand, Paige sets off to John's recording compound, ready to unfold her future.

But the ever-elusive John, with his mysterious history, and Paige, a big dreamer but naive about her footing in life, clash as much as they coalesce. Before they can change the world through Paige's music, the improbable duo must learn to work together.
A coming of age story and retrospective, The Big Wide Calm focuses on human nature and the complexities of love through the eyes of young and old on the journey of creating the perfect album.


Paige Plant is a singer/songwriter with a handful of songs under her belt. When she meets John, they feel a connection. He agrees to mentor her musical abilities with his many years of expertise. They agree to work together for a year while she writes and records one song per month.  Little does Paige know how much she will learn and grow in that short time.

I loved Paige’s personality and spunk. There was so much contrast from where she started, to where she ended in such a sort time. I liked how all her surrounding characters complimented her growth, and seemed to grow along with her. I’m glad the author gave closure to Paige and John. It made the story come full circle.

**The above opinions are 100% my own, whether I purchased the book or it was given to me.

Buy the book from...
Amazon.com    Barnes and Noble

If Rich Marcello could choose only one creative mentor, he'd give the role to Jonathan Richman and the Modern Lovers. This is not only because he currently resides in New England, where Jonathan started, but because of his life as a contemporary fiction author, poet and songwriter, whose literary inspiration often stems from songs he's written. Rich grew up in New Jersey surrounded by song and word.
For a while it seemed right to travel the musician's path, especially during his stint in his college folk group, at The University of Notre Dame, where he wrote and recorded his first original songs. But, as is true for many musicians, graduation led him down a different road, one on which he found his love for high technology. There, he enjoyed a successful career as a technology executive, managing several multi-billion dollar businesses for Fortune 500 companies.